Projects for next year

I've sat down this week (I have a 2 hour one-way commute to work, so plenty of time to think) and storted setting my project priorities for next year, and what I'd need to get those finished... This could also be seen as a wishlist for Secret and other Santas :)

1. Desert 28mm (mostly Perry miniatures) - most of the stuff is done for this, but I may need a British 6-pdr, as we saw in our last games, when the German armour comes on, that the Boys rifles and 2 pdrs can't cut it. I also want to extend my German FJ för the Ramcke Brigade (that can also extend to Sicily, Italy and at a pinch even Normandy) with some extra troops, e.g. more riflemen, support, even MG42s, and the cool LG40 75mm RCL, or the sPzB AT gun

2, Our Dux Gondorum project, Dux Brittaniorun in a Middle Earth setting. I managed to get a lot of 2nd hand figures for this which all but fills my needs, but some extra Rohan Riders would be useful unless I manage to convert the Conquest Games Normans I bought just to do that.

3. Extending my AB miniatures British paras. I have about a platoon now, but need an additional section, or some extra supports, like the howitzer crew, or jeep crews. Even if I managed to source some stuff from SHQ and Shell Hole Scenics at Crisis.

4. Frostgrave - I have most I need for the warband(s), but need a healer or an apothecary, and an extra wizard and apprentice, like the Chronomancer, or the Illusionist. And some monsters, one always needs more monsters (like the constructs or animals om this page)

5. Perhaps start Norwegians, Dutch or Belgians for CoC for WWII in 20mm, Early War miniatures have nice sets. And for these my 20mm Fallschirmjäger may need some reinforcements, an extra section or some support weapons.

6. For our French in Indochina project, we can always use more French or Viet Minh infantry or support weapons, from FNG Miniatures. 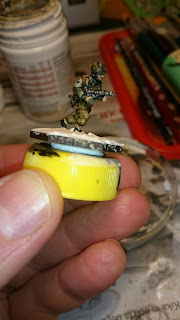 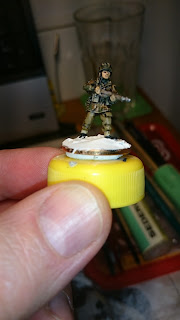 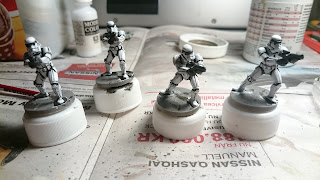 Imperial Assault storm troopers I'm painting for a friend of a friend. I now remember why I hated painting white uniforms ;-)