Follow up on the article on the Red Dragon Gaming walls I got.

I missed some pictures along the way, but those steps are easy to imagine...


I started by washing them in the sink with detergent.

As the walls have inbuilt bases that I figured big enough for my purpose, I decided not to base them.

After drying outside over night, I checked the priming and did some extra touches on missed spots with Vallejo paint-on black primer. At this stage I noticed that there are some real deep holes in the walls - it seems that the masters were built by glueing together some stones and a mould made of that. Not a problem for me (I want these for Dark Ages and Dux Gondorum), but could be that they're less relevant in a more "ordered" environment. This was also something that my friend Laffe commented on.

Next step: drybrushing the walls in shades of grey (definitely not 50!!). I used a white acrylic craft paint for this, mixed with some Vallejo black primer (as I'd run out of black craft paint and I have literally half a liter of primer).

I did three drybrushing layers, adding more and more white for each layer. 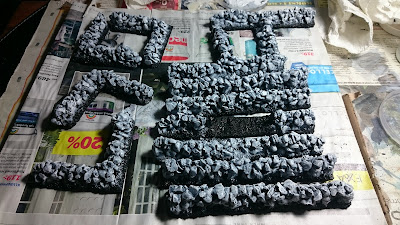 After that I painted the ground dark brown with an acrylic paint for the same range, and then drybrushed that, by adding more and more sand colour to the brown. Again, I used three layers. 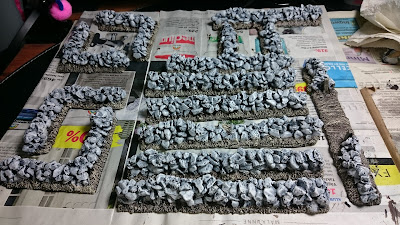 After drying, I mixed up a wash consisting of 50% Futur Pledge (product to clean/treat stone floors, which acts as a protective layer as well as good basis for a wash. It is slightly shiny, so requires a matt varnish afterwards), 40% Army Painter Dark Tone ink and 10% Strong tone (to give it a more earthy appearance). I generously slathered the walls and the ground with this, this brings them "together" I feel. I missed taking a picture after this.

Next came a final drybrush - Vallejo model Off-White on the walls and Pale Sand on the ground. No picture here either, I was cracking on at this stage.

I then started to add flock and grass. I didn't take pictures after each step though, but here's what I did:
This give this endresult (before applying a matt varnish spray. 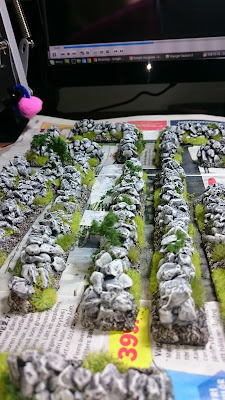 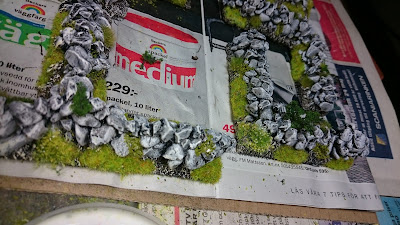 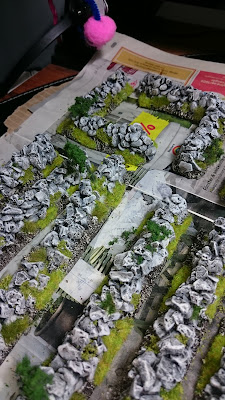 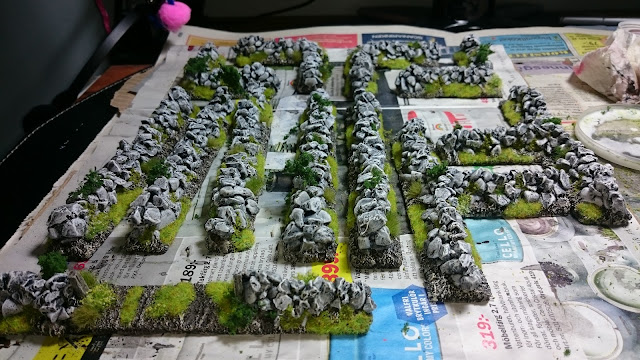 In the end I spent quite some time painting and basing these, but I'm very happy with the end result. From a modest investment of £16 and a couple of hours of work, this is a nice result.